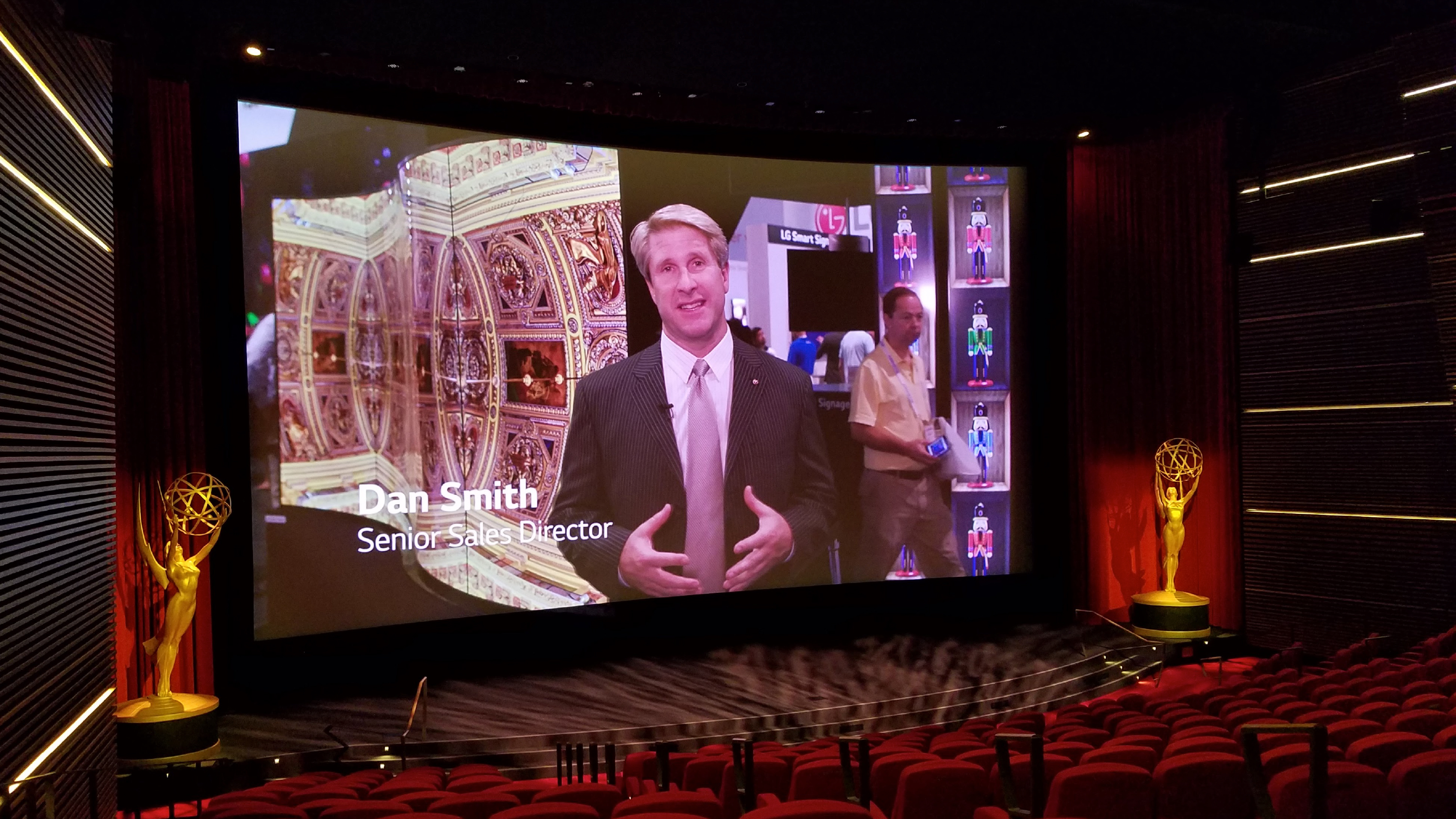 It was another record-breaker as Tuesday’s LA roadshow drew a 65% increase in attendance over last year’s LA show. This time, visitors were treated to a day at the Television Academy’s Saban Media Center, the newest addition to the organization dedicated to the future of creativity and advancement of telecomm arts and sciences. They experienced LG’s latest commercial display products with private product zone tours, enjoyed a tour of the academy grounds, had lunch and delighted in a tasting of exceptional wines from Chateau Montelena . Everyone left with a gift bottle of 2010 Petite Syrah.

Once again, the roadshow attendees were amazed by our technology. Many found our dual-sided OLED display to be one of the most pronounced stars at the show, and by just looking at it many could immediately think of ways it would improve their business. The 86-inch Ultra Stretch display was also a big winner, igniting lots of aha moments for how they finally had a tool for ideas they weren’t previously able to deliver. Visitors were finding inspiration from the whole of LG as well, like the LG Magic View, which mimics a lenticular treatment of multiple images depending on viewing angle.

LG technology is already plentiful at the Saban Media Center, and grabbing lots of attention every day. Our 3 x 3 video wall (that’s nine display panels) is a standout in the lobby, while 65-inch OLED consumer TVs grace the registration center. Also in the lobby is our ultimate consumer television and masterpiece of design, the LG Signature OLED. On the second floor is a 2 x 2 video wall (four panels), and the Governor’s Room is host to our 98-inch commercial display.

LG was on the big screen, too. The Television Academy’s state-of-the-art 600-seat Wolf Theater, one of the finest venues for film and television in LA, was running LG videos on the latest Dolby Vision laser projection and Dolby Atmos audio system, while statues of Emmys adorned the stage. Also, while walking through the center we walked through history, encountering statues and artwork of the legends of TV, such as Jackie Gleason, Red Skelton and Carol Burnett.

We’ve all been having a great time at our roadshows this year, and if we’re anywhere near your vicinity you really need to come out and experience one. We promise you’ll have an enlightening and exciting time.

Next stop: The Mile High City

Our next roadshow will be in Denver on September 8, from 9am – 1:30pm and 12pm – 4:30pm, at the Wings Over the Rockies Air & Space Museum. We’ll provide lunch and a Micro Brew tasting, and you’ll take home an LG beer stein. What’s more, we’ll have a special guest for autographs and photos. You’ll also have plenty of time to discover the museum exhibits, including a rare B-18A Bolo, an RF-84K Thunderflash Parasite, and even a Star Wars X-Wing fighter.